The reproductive system of the carp 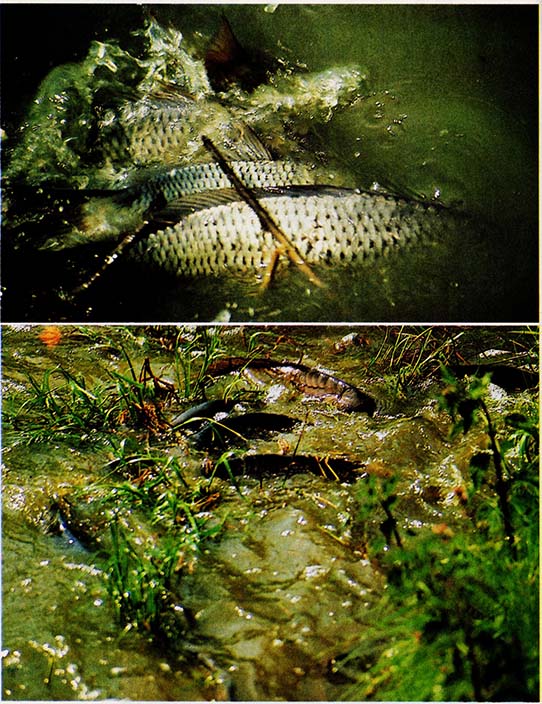 Carp is a dioecious fish. Both expressions (hermafrodytyzm) in this species it is observed in extremely rare cases (Krupauer, 1961). The outward signs of the sexual dimorphism of carp are quite difficult to spot. In males, they do not appear until the mating season. They are then visible on the head in the form of a "pearl rash”, in the form of gray-white mounds. However, the rash in carp is mild, and not in all male stingers. After the mating season has passed, the rash disappears.

Male carp during breeding season have a triangular slit as a sex hole, pulled a little deeper into the body; with light pressure on the abdomen, the discharge of sperm is visible.

The sexual opening of mature females is light pink in color and has the form of a slightly protruding nipple; the abdomen of such females is strongly swollen.

The carp sex glands are paired and elongated in shape. They are located on both sides, just below the swim bladder. The uneven development of both sex glands is quite common in carp. It is being watched (Solewski, 1957 a, b) both in males (smaller gland on the left side), as well as in females (the smaller one on the right).

The mature female sex glands - the ovaries - are yellowish in color. They have a chamber structure. Their walls contain female reproductive cells - eggs at various stages of development - from I to VI according to the six-point Meyen scale (behind Pliszka, 1964). At the back, the ovaries narrow into the fallopian tubes. They connect and exit as a common conduit to the outside of the body just behind the anus, but before the opening of the ureter.

The testicles of mature males are cream-white in color. They consist of a group of vesicles divided into a series of inwardly open chambers leading to the common drainage duct - the vas deferens. Spermatogonia is located in the walls of the chambers, constituting the beginning of male reproductive cells - sperm. The vas deferens form a single common tube that extends outside the body like a fallopian tube.

At the carp, as with all osseous fish, the reproductive system does not connect with the excretory system. Both the vas deferens, and carp fallopian tubes are formed independently of the urinary system.

Development of the reproductive glands of both sexes of carp, as already mentioned above, proceeds at a different pace. Males reach sexual maturity earlier than females. From Steffens' research (1969) it follows, that the ovaries accounted for 18,8% the body weight of mature females, weighing an average of 4412 g. The testicles accounted for 10% weight of males weighing po 3000 g. These data canto be accepted as essential in our climatic conditions. In a tropical climate, e.g.. in India, the ovaries can form to 38%, and the testicles do 32% the body weight of carp spawners (Alikunhi, 1966).

Carp spermatozoa have a structure very similar to that described for other fish of the carp family. The carp sperm head is spherical in shape and 2-3 µ in diameter.

The sperm count in the sperm of a carp is very large, ranging from 25 do 30 min w 1 mm3. Carp sperm in the aquatic environment retain the ability to move for 1.5-5 minutes, depending on the water temperature. This period can be extended by adding a physiological saline solution to the water 0,4%. Semen collected and stored dry, at a temperature of 1-4 °, retains the ability to fertilize eggs for several days.

Carp eggs, spherical shape, have a structure similar to that of other fish from the carp family. Their diameter is 1.15-1.56 mm. The size of the carp's eggs depends on the size and age of the female and grows up to about eight years of age, then gradually decreases.

The surface of the carp egg membrane is sticky. Thanks to this, after expulsion from the fallopian tube, it can attach to a solid surface. The yolk of carp's eggs is average 6,2% fat.