Carp is distinguished by a fairly large range of breeding start times. It depends on environmental conditions, mainly on the water temperature. The readiness of mature carp to breed therefore varies from year to year.

The time at which carp starts spawning in natural conditions is also variable. In female river carp ovaries, all eggs do not mature at the same time. Individual portions of them” they mature at certain intervals, and as a result they are gradually excreted from the body during one spawning period. For example, in wild Volga carp, the excretion of such portions of mature eggs during breeding takes place several times, at intervals of approx 1 week. This is an example of multi-litter river carp spawning.

In India's tropical climate, carp reproduces 5 or 6 times in one year (Alikunhi, 1966). Awake, in favorable nutritional conditions, carp even rubs 8 times a year. In the subtropical climate zone, e.g.. in Israel in the Jordan Valley, the carp starts spawning in one year 2 times - in early spring and in September. In the climate of Central Europe, carp spawns once a year - from April to July. The spawning act itself usually takes several hours. The carp spawns, when the water temperature reaches 18-20 °. Simultaneous spawning by females and dandelions into the water (sperm) by males takes place in shallow and quiet floodplains after spring rivers of river waters. Carp is a phytophilic fish, i.e., that his fertilized eggs stick to the shoots and leaves of plants immersed in water. 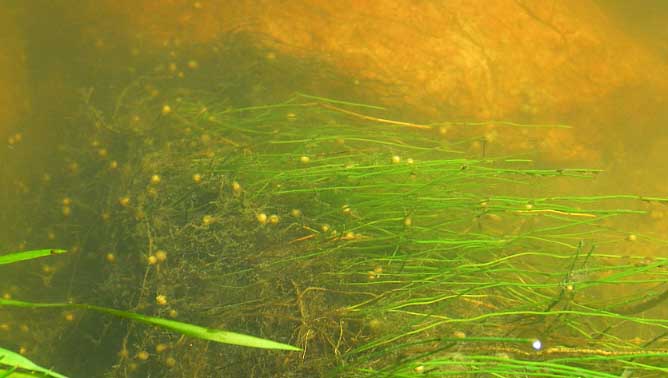 Carp races and spawning games take place without fights between males. Zarnecki and Rychlicki carried out detailed observations and description of the individual spawning phases (1961) in a small glassed-in swimming pool, specially adapted for this type of research. Forhiding of spawners during ongoing spawning 4 at. took the following course:

a) the male was circling the female calmly swimming,

b) the female swam to the bottom and took an oblique position in relation to it,

c) the female assumed a horizontal position at the bottom, and the male lined up parallel next to her,

d) spasmodic convulsions of the body of both fish lasting for approx 1 sec, there was a rapid simultaneous excretion of roe and milk into the water - this was repeated 1-4 times,

e) the fish were swimming just below the surface of the water, the male swam around the female for 1-5 minutes; this was followed by the re-swimming of the fish to the bottom and repeating the described behavior.

Under natural surface water conditions (the river, Lakes) in Poland, carp generally do not spawn (Gąsowska, 1962; Staff, 1950). Admittedly in Lake Licheń, Carp spawning was observed with heated discharges from the power plant, but the offspring did not survive. Here, the successful reproduction of carp takes place only in special ponds or in hatcheries.